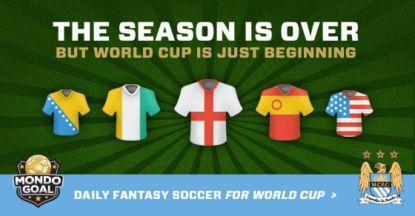 To all football fans, sit tight because the news you are about to hear is going to rock your world upside down. For the very first time in the history of online football games, the best football club in Europe and perhaps in the world, FC Barcelona, can help you win a great deal of money. We owe this rather a genius idea to the game developer Mondogoal. If you have not heard about Mondogoal Fantasy yet, do not panic, because this article is going to inform you about the terms and conditions of the game. You will also know more about the financial advantages of the game, brought to you by the best football clubs on the planet! You can also follow Mondogoal on their Facebook page.

If you are looking for a new online game featuring football and real money, then Mondogoal Fantasy is the one game you might want to check. This infamous game has been released exactly one year ago, by the software provider Mondogoal. Some of you might be familiar with a similar game called Football Manager that is being extremely successful lately among the football fanatics. Mondogoal Fantasy is similar to an online casino available worldwide, including countries such as the United States of America, Canada, or the United Kingdom. Indeed, Mondogoal Fantasy allows you to combine your passion for football and your interest in earning large amounts of money thanks to your passion. Players subscribing to the website will be able to get paid on the same day, and benefit from a 200% bonus upon their first deposit, as well as, a free entry for their first match! Therefore, the financial advantages of playing on Mondogoal Fantasy are quite obvious.

« Players subscribing to the website will be able to get paid the same day, and benefit from a 200% bonus upon their first deposit, as well as, a free entry for your first match! »

Now that you are familiar with what could be achieved financially through the game, it is time for you to learn how to play. The rules of the game are rather simple and accessible to all since they resemble the FIFA or Football Manager rules. There are 3 different steps each player should follow in order to benefit from the greatest experience possible on Mondogoal Fantasy. First, you will have to pick your team. Second, you will build your team and put in specific formations that will be most suited for your players. Third and final point, you will have to add funds to your account in order to bet and eventually win and bankrupt your opponents. Once you complete those 3 tasks, you shall be able to watch your team’s game and earn money based on your team’s performance.

…featuring the best football clubs of all time

The most exciting part has yet to come, dear fans. Indeed, you will benefit from the ultimate hall of fame of European football clubs. If you enjoy the English Premier League, you will be ecstatic to find out that some of the teams you can choose from are: Manchester City, Liverpool, West Ham… If you are a fan of Italian football the best team available is by far AC Milan. Last but not least, the new team to enter the game, from the Spanish Liga, is the great FC Barcelona! Mondogoal is extremely enthused to announce that it has signed a partnership with the Spanish football club at the beginning of the week. The FC Barcelona is the most followed club in the history of social media, gathering over 80 million fans on Facebook alone. For having tried the game, let me tell you that the entire allgamesonline.org team cannot wait to play with the Barca team and benefit from its best players to increase our bankroll. You could say the beautiful game just got more attractive, as we also offer to you a great sports guide site for betting, tips, and casinos https://www.esportsbettingnetwork.com/. We hope that after reading this article you will be inclined to pay them a visit and increase your bank role too!